My husband will be the first to tell you that I am not a green thumb. In fact, my step-daughters will even have a sarcastic comment or two about my total lack of ability.

But yesterday I helped my DH do exactly that. We have been designing and developing our front garden.

Or, to be totally honest, my DH has designed it totally, but I have had creative input: yep, do that. That's about the extent of it though.

We have a garden that is basically dirt and sawdust. I know your first thought is: we must have a newly built house. But that's not true as our house is over 100 years old. We just purchased an unfinished property.

So, we (not DH mainly) has been paving the paths and raking the leaves and having a general tidy up.

I mentioned to a friend on Sunday that my husband was laying brick. I tell you, it's a totally dirty job. You should have seen my work overalls afterwards.

But I am delighted with the results. We now have a lovely brick path leading to the front steps and it looks just quaint. Apart from the very shiny cement inbetween the bricks, it looks like it has always been there. Now we just need to get that picket fence up and going, pave the driveway, install the workshop, add the extension, put in a new kitchen...

Email ThisBlogThis!Share to TwitterShare to FacebookShare to Pinterest
Labels: home, my life

WAITING FOR THE PENGUINS. 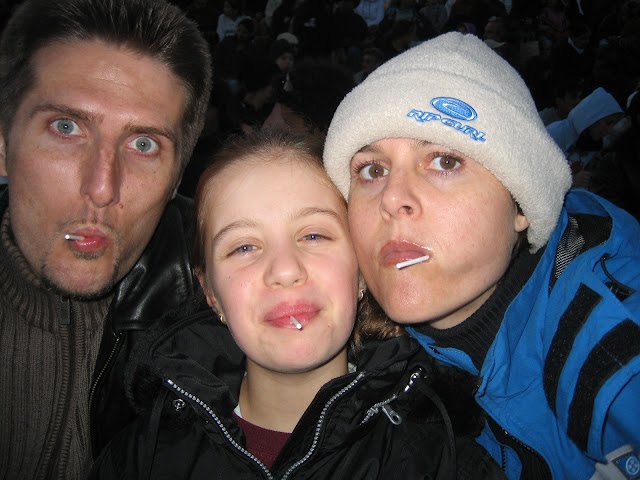 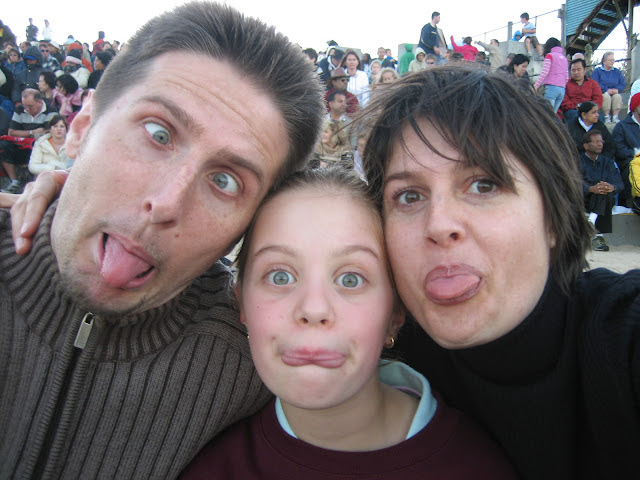 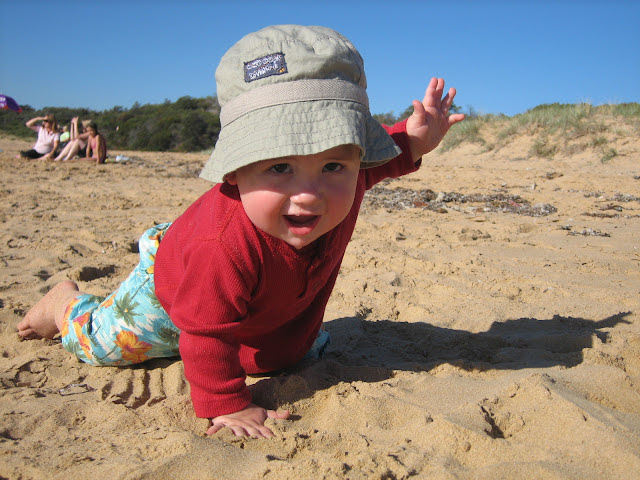 It was as close to a family reunion that I will ever have (except for the Christmas to come - but more about that at Christmas!). My 'baby' brother Stephen came to Melbourne and we headed to Phillip Island where my Dad and Step-mum have their beach house.

It was a scream and lots of fun. I think my little sister was in absolute heaven with so many brothers and sisters around. And my brother really brings out the 'naughty' in her! And my dad enjoyed having three of his four brood around. Yep, and we ate way to well with Ria's cooking.

We checked out the penguins and had a bit of fun on the side and ate too much junk while waiting for the sun to go down and for the penguins to come home. The penguin show was a little disappointing... not quite as many as I had hoped, but still it was cute watching them all come out of the ocean and waddle their way home. Just only around 100 instead of the thousands I had imagined.

Overall, it was such a relaxing weekend and Maddy really enjoyed his first easter egg. Did someone say Choklat? I think that will be his first word. Not mummy and daddy...!

Oh, and did I mention how beautiful the weather was?

| Stephen, Daisy and I filling in time; Madison enjoying the scrumptious weather at Phillip Island. |
Posted by Unknown at 12:21 pm No comments:

Email ThisBlogThis!Share to TwitterShare to FacebookShare to Pinterest
Labels: my life, the boys 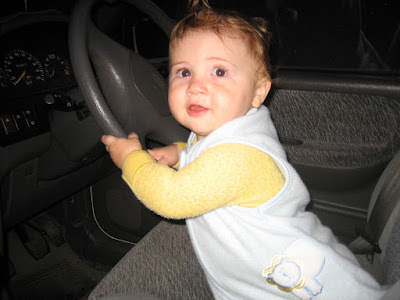 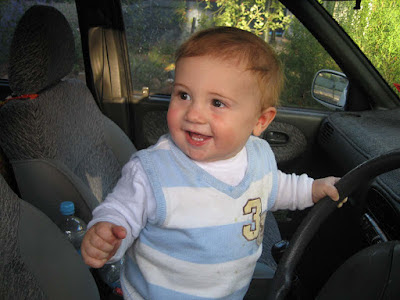 Since Madison first learnt to make sounds, he has been able to make a few noises that sound a lot like an engine. Or a car, or a bike...

He is such a boy, and he delights in getting behind the wheel whenever he can.

Check out the grin!
Posted by Unknown at 11:14 pm No comments: 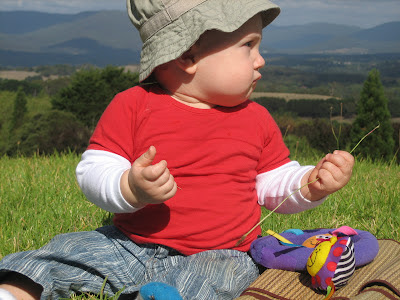 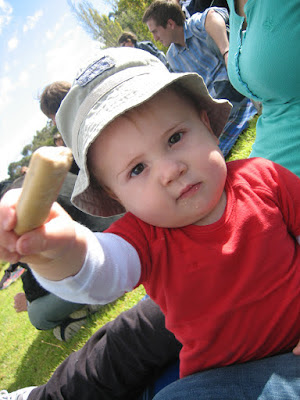 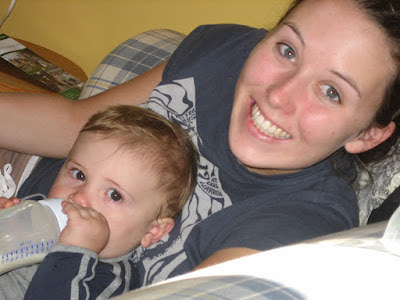 A couple of weeks back Madison's biggest sister Kelly came to visit.

We all had a lovely time and on the weekend and went up to Warburton for a church afternoon program. The view was lovely and Kelly took some cute pics.

It's fantastic to be near the girls again so we can catch up more regularly...

Above: Madison and that view, want some teething rusk?, and with his big sister.
Posted by Unknown at 8:25 pm No comments:

Email ThisBlogThis!Share to TwitterShare to FacebookShare to Pinterest
Labels: parenting, the boys, the girls 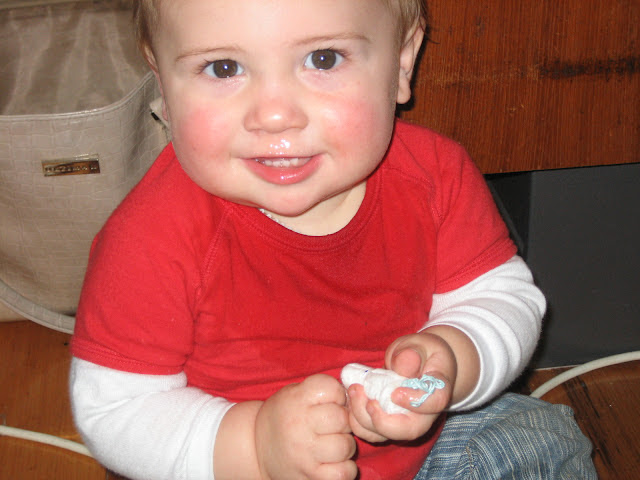 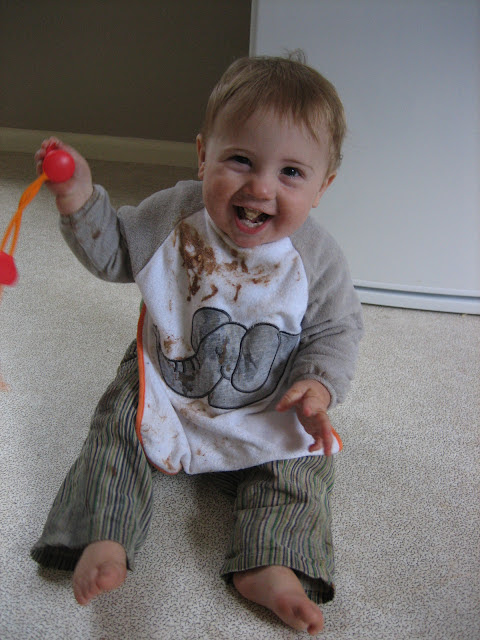 I now understand what all my friends and family meant when they said: "When your child is quiet... beware!"

A couple of things have happened this week which are definitely worth sharing.

Usually when I work from home, I have my laptop on a very large desk. Madison usually rummages around underneath playing with chords, toys and usually whatever he finds in the vicinity. He is usually happy just to be close to mummy...

I became quite absorbed in what I was doing (ask my DH - I do that quite well!) and it was some time before I realised that Madison had been quiet for a while. I knew he was safe as he was at my feet, but something had particularly taken his fancy. I looked down to find that he had gotten into my handbag and unwrapped - wait for it - a tampon.

That's not the best bit.

He was sucking on it. Yes, that's gross.

But I consoled myself in thinking it was a brand new one in a wrapper.

Now that Madison is quite the experienced crawler, he is happy to now entertain himself around the house. Just last week he has discovered how to open the pantry doors. Unfortunately we do not have a large built in, but rather an kitchen hutch which my DH built some years ago. So, it is low and perfect Madison height.

I don't mind when he is in there because most of the food is either in jars or tupperware. But he was one step ahead of mummy today.

Checking my emails, doing the washing and the sorts of odds and ends mums do kept me busy and knowing I could hear Madison near by meant he was happy, breathing and sort-of out of trouble...

I came back into the kitchen after putting on a load of washing to find my son had taken out most of the food items out of the bottom shelf and had found himself a Twix bar. He had been chewing the wrapper so intently he had actually gotten himself a good taste of the chocolate.

So good in fact that he had it all over his jeans, hands, face, the floor. But the smile was worth a million dollars! He was so damn happy with himself! Yes, he is a choco-holic!

The smile was better than the times he plays in the fireplace soot and comes out of the room with a black face, black hands, black clothes and thinks I am none the wiser! Aah, the innocence!

Madison is certainly going to be a little character and is already proving to be the true explorer!

Above: Maddy with the tampon, Maddy the chocoholic (check out that smile)!
Posted by Unknown at 3:11 pm No comments: