A DAY IN THE LIFE OF A TV HOST. 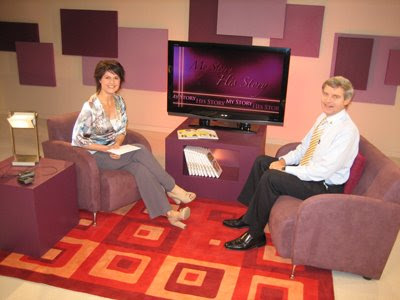 This week has been a biggie. It was the first time I have been filmed to go on TV. Yes, TV. And what an amazing experience it was.

Six months ago my boss passed by my desk and asked if I would host a show for the upcoming Australian Project Hope series which would air in around 3-5 months time. The show was "My Story: His Story" and it's a 13-part series which will be shown on Hope Channel - a family friendly television network that spans the globe (so if you have a satellite or Foxtel you'll be able to see it).

It's not overwhelming at all to know that Hope Channel is aired in over 13 countries (including Aruba, Australia, Brazil, Canada, Norway, Nigeria, Philippines, Russia, and United States of America) while negotiations are under way for it to be free to air in the US (apparently it's quite popular over there).

So, what is it that I can enlighten you about being on TV? Perhaps I should go through it all blow by blow...


1. Memory is pretty important. No tv prompts, no big sheets of paper. Oh, there is an A5 cheat card you can use. And yes, it's pretty useless but very nice to hold when you're nervous - which I was. Apart from the card, there is only looking lovingly into the lense like it's your best friend. Is it hard to do? You betcha.

So the night before filming I was made aware of my options and so it was a long night memorising my opening and closing lines for each break and trying hard not to panic. Probably not the best start for an amatuer tv host.

2. The set. Thinking it would be much bigger than it was, I was surprised to see it was in a pretty small room. And the walls were not even square. A little trick in camera deception which I quite thought was pretty clever. But the sets were absolutely amazing. The colours were bright, snappy and very trendy. Really professional stuff considering the walls are thin and the tables are made of board and, there's lots of foam on the walls. Fascinating to see how great it all looks on camera.

3. Cameras. Thinking there would be a maximum of two cameras, I was surprised to see a total of four. One for me, one for the guest, a wide screen, and then a closer view of the interaction between the host and guest. That means there are a heap of people hanging around during the filming. Because there are the camera guys, people taking notes on what you're saying (and correcting you), the 'go-between' guy, and then the two-three guys watching you on screen in the editing room and seeing how it actually looks on tv. (And they come out a lot to snip stray hairs, pluck eyebrows, cut cotton threads, etc.) To say it's all a heap of 'perfection' is an understatement.

4. Make up room. The make up in itself is a pretty interesting experience. It's quite lengthy, and considering I wasn't being prepped to be a monster with any 'special effects', it was still quite a rigmoral. My skin was sussed out by the Hope producer to ensure it was 'good enough' which was a little disconcerting. But on the day there was blotting tissue, anti shine cream, heavy foundation, powder, then double the 'toppings' - just to look natural on the high definition screen. It was a teeny tiny taste of why actors get obsessed about how they look. And I was fully clothed. So, imagine the fuss when an actor has to do a nude scene!

5. The first take. Okay, so you sit in your seat for a while to get used to the feel of four cameras, a tonne of lights and talking to your new best friend (ie. the camera). So, after a day and a half of filming, it is NOTHING like sitting in your lounge room despite how many times people tell you it will.

Then after debriefing and being calmed down by everyone (actually that part is great! Everyone is so relaxed and so affirming, it's awesome!), and praying (VERY glad about that bit) the first take starts. And yes, I make my first mistake in the first sentence. Well, actually I wasn't smiling enough.

So then I'm told that a vivacious person in 3D (ie. I think that was meant to be me in real life) is halved in 2D (me on tv). So, to up the ante I have to be doubly bubbly in order to seem just the usual me in real life.

So now I must: (a) remember my lines, (b) look right into the lense of the camera, and (c) smile. And then I must keep smiling all the way through the paragraph. Keep smiling. Keep smiling. And trust me, that is harder than it looks.

6. The first few shows. I became use to the constume changes, the constant smiling, but then during the course of the filming also discover (a) I must not cock my head to one side and keep my head straight at all times, (b) not giggle during a funny line (which, in fact, is hard to do when you've been told not to), (c) keep the person feeling like I am interested in what their saying so they feel okay, (d) keep smiling throughout the interview (e) AND then not let my eyes show that I am thinking of the next line (yeah, I'd never noticed that before either). Also, be on the ready with a good question in case the nervous guest (because I'm not nervous at all) runs out of things to say. After all, I am the host (Did anyone say Oprah? Dr Phil?).

7. The last few shows. My cheeks ache by the third show and I have a big headache throughout the sixth. I am stuttering through my lines and it is now taking double the takes to get it right. And yes, you heard right, we filmed six shows in one day.

8. End of the first day. I am exhausted. But am now running completely and utterly on adrenalin. And continue to do so all throughout dinner with my new tv friends and until 1am when I finally unwind and go to sleep.

8. The next day. Waking up at 6:30am the next morning (did I mention I'm already on the filming site?), I realise that my headache is still very much there, but am amazed how normal the make up routine is now. Back on the set ready to go at 8am, my lines are much better second day in. And do I feel like an expert just yet? I think so!

The interviews seem to go much quicker and the producers are happy with how its gone. But trust me. I am not racing to any commercial channel to tell them they have to hire me. It's been a great experience, and with another day of shooting in a month's time I have more to look forward to.