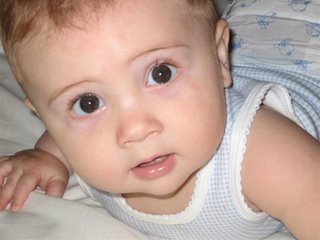 Madison has his first two teeth. They made their way through his bottom gums just last Monday and now they tap nicely on a glass when he is drinking.

They came with relatively little fuss, a lot of extra sleeping and just a few grizzles.

He is enjoying the new feel of the teeth as he is often pulling funny little faces as he discovers the foreign objects in his mouth. It is most entertaining to watch.

Maddy has also discovered that he can move - backwards. He gets himself into lots of corners and discovers he can't get out... but we are having to watch his every move now.
Posted by Unknown at 2:22 pm