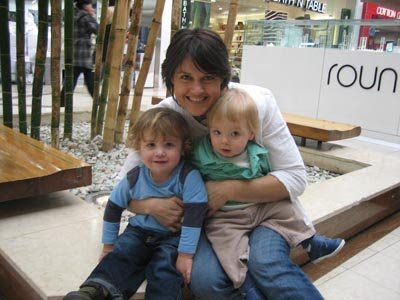 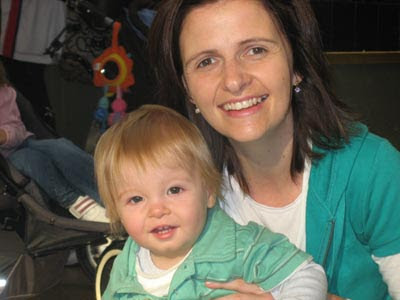 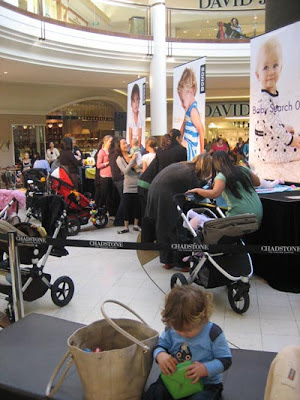 It's official. I am a pretentious mother.

And I have proof.

Madison was entered into the Bond Baby Search 2008.

It was for a few reasons, curiosity being the main contender. Oh, and I think my boy's the best looking little guy to enter this world. (Me and every other mother.)

But I've got to admit, I thought it would be mad, but it was madder than mad. Busier than busy, and just a bit ridiculous.

Ange was the one who convinced me to come as she was entering her boy Charlie. I thought I would just keep her company, but then she told me to register because "you never know, Madison could be the face they're looking for."

And I was hooked.

So, on Friday I was up at some ungodly hour (5:30am) because I wanted to squeeze a gym session in first before glamming up (1) my boy, and then (2) myself. Then I had to get to Ange's by 8am so we could make the trek to Chaddy. Even after all the planning Madison was still in his PJ's when we arrived at Ange's.

We arrived at Chadstone by 9:10am after what could feel like a full day already (what with moving the babyseat into Ange's car - oh, THAT was fun). We entered the shopping centre and expected a pumping shopping centre. But it was not to be.

But with another few shops later, the reality was before us. A full circle around the Bonds Stage that went the length of half the centre. Those who haven't been to the "Fashion Capital" it's awfully HUGE!

So, by the time we actually FOUND the end of the line, Chaddy Security told us the line was 'closed' at that point and to come back in half an hour.

Truth be told, we agreed not to take it too seriously, so we shopped for the boys (shoes, pants, tops and beanies), then had a yummy hot chockie (Ange, we must go there again!), then shopped some more.

Just before we headed home after our 'big day out', at 11:45am, we thought we'd check out the line again.

And, it was smaller.

So we jumped back in the queue. And after the Chaddy Security discouraging us (again), we thought it was worth the wait.

By 12:15pm the boys had their photos taken and they were IN the comp.

The only problem was both the boys were so exhausted (read, mothers too) they weren't really into having a photo taken and were all grizzly.

I guess we will find out on Monday, 26 May when they announce the finalists. But somehow I get the feeling, the boys will be winners in our hearts.

And that's enough for me.

Above: Me, Charlie and Madison; Ange and Charlie; Madison showing more interest in his sandwich than the baby search.
Posted by Unknown at 8:46 pm

Email ThisBlogThis!Share to TwitterShare to FacebookShare to Pinterest
Labels: my life, the boys