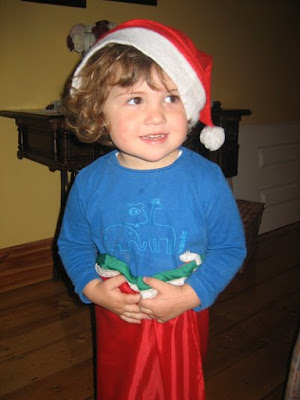 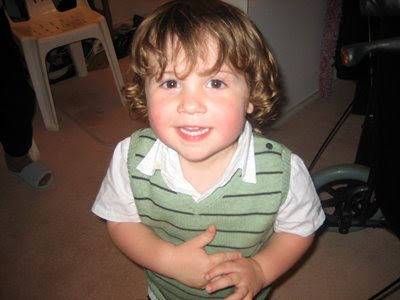 I realised it's been a while since I updated you with stories and pictures of our lovely boy.

As you may have already heard, he's quite the character, but lately he's been doing some very funny things.

One of them is during his 'sleep time'. Instead of the obvious, he can now be heard pulling every article off his bed and throwing them on the floor. My office is on the same wall as his bed, and so often I hear action (and singing), but assume he is rocking or moving about in the bed. But lately, I fear when I walk into the room, I will be making that bed all over again. Perhaps I should see it as a good thing, because it obviously tires him out to the point of falling asleep on the bed slats (because the mattress is overboard too). But that can't be comfortable.

The independence of a two year old is quite gorgeous. Because, they want to do everything, even if they can't.

So, we're about to go out in the car and I want to put his seat belt on.

There are just things he CANNOT do.

But then again, there are so many things he CAN do.

Like decorate the Christmas tree (over and over again). Decorate the choc-chip cookies with choc-chips. Cut the mushrooms with the egg slicer (LOVES that job).

He's even getting quite clever with his clothes. And his arms are almost long enough to put tops over his head. Almost.

He's even been spotted helping daddy with the built-in wardrobes. Last week he was hammering nails in a block of wood. With sunglasses on. Just like daddy.

Then yesterday he was sitting at my laptop looking at the screen intently, hand on the mouse. With reading glasses on. Just like mummy.

But some of his attemps are original. For example putting himself in a Christmas sack and putting on a Christmas hat, and hopping down the hallway to show us.