AND THE WINNER OF THE TELLY AWARD GOES TO... 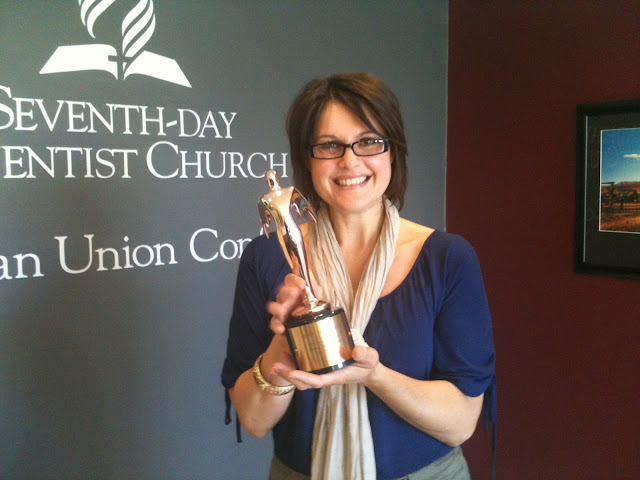 Welcome to the home of awards over here at a day in the life of us. Can you believe I've gotten another award? (And can you tell that I was a little excited to receive it?) It even has my name on it. (Albeit, spelt incorrectly - but hey - you can't have everything...) It's so heavy it could kill someone, bronze and really, really shiny. It even has wings.

It's not quite an Oscar (although it's just as majestic). And it's called a Telly.

Have I lost you? Well, here's a short version catch up...


Around two years ago, I hosted a Christian television program called "My Story: His Story" on Hope Channel (you can see the original post here). It's been on TV for a while now and possibly still getting a bit of air time.

Then I heard early this year from Hope Channel's head office in America that the show had won three American Telly Awards (you can see that post here).

So, I did what anyone would do. I googled it. And found this:

The Telly Awards was founded in 1978 to honor excellence in local, regional and cable TV commercials. Non-broadcast video and TV program categories were soon added. Today, the Telly is one of the most sought-after awards by industry leaders, from large international firms to local production companies and ad agencies. With over 200 categories, over 14,000 participants entered in 2009.

Not overwhelming. At. All.

And today at work, there was a little surprise presentation. (Yes, eight of us exactly. Because it's only two days until Christmas people!) The show's producer presented it. No tears, no speech. Just a few laughs from the guys in my office. Oh, and a photo or two to remember it by.

It took a little time for the award to come from the States. Then from Hope Channel offices in Sydney. But now it is here in Melbourne. Sitting/standing right next to me, in fact.

And because I'm such a classy gal, I have my award sitting on my messy desk. (I just had to take a few close ups for you). 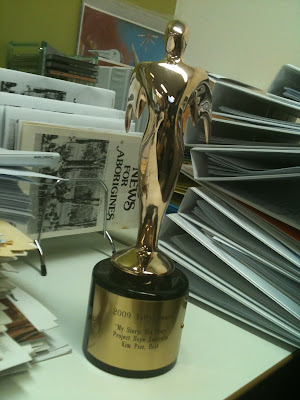 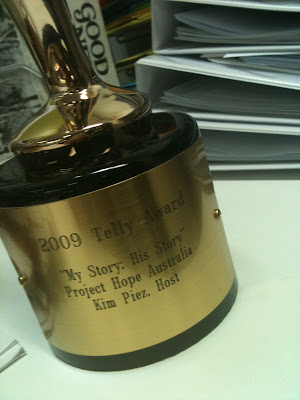 As Darryl Kerrigan (of The Castle) would say: "It's going straight to the pool room."

Should I leave it by the door in case of burglars? 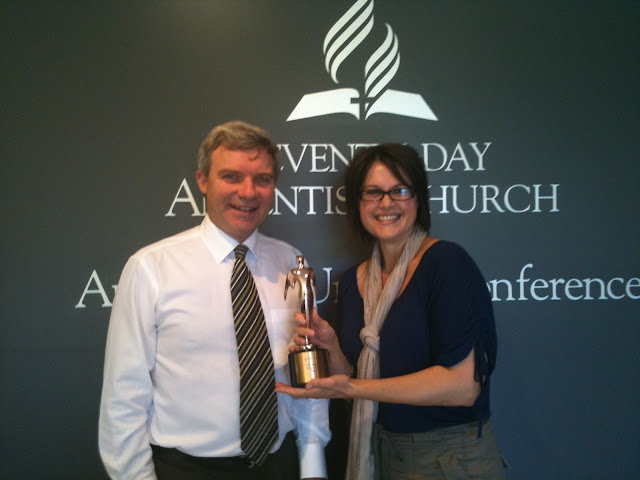 Here's Telly with me and the show's producer (he has a Telly too!).

Have you ever won an award?
Posted by Unknown at 3:56 pm

Email ThisBlogThis!Share to TwitterShare to FacebookShare to Pinterest
Labels: my life, tv star