4th plan b | being goofy instead of cleaning 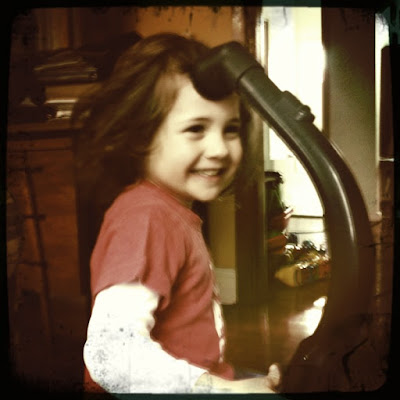 Today has been trying. That's because I was attempting a Non-plan Plan day. But i've found they don't seem to work.

That was because my eldest had nothing to get excited about, and from his perspective that was just depressing. There were lots of cuddles, games and even some television, but he was satisfied for only a very short time before asking, "Aren't we going to do anything today?"

Didn't he understand that doing nothing was actually lots of little somethings? Perhaps I need to sell the idea better to him? Perhaps it should be a day of games and cuddles at home. Why can't he be happy with that?

As part of 'helping' today, instead of just saying "no", I let him vacuum. Usually his type of vacuuming means it takes much longer to do a job that I already don't like. Seriously, why would you want to vacuum longer than you have to?

So, we vacuumed everything. The floor, the books, the CDs, the DVDs, his clothes, his hand, his feet, his hair. It was vacuuming hair that was the best as his hair stood on end. It looked funny, and created lots of giggles. He vacuumed Mummy's hair and Noah's hair too. It was so much fun, I think the vacuum cleaner was on for about an hour longer than necessary.

But it was something during a day of 'nothing'. And his face was worth it.
Posted by Unknown at 8:27 pm