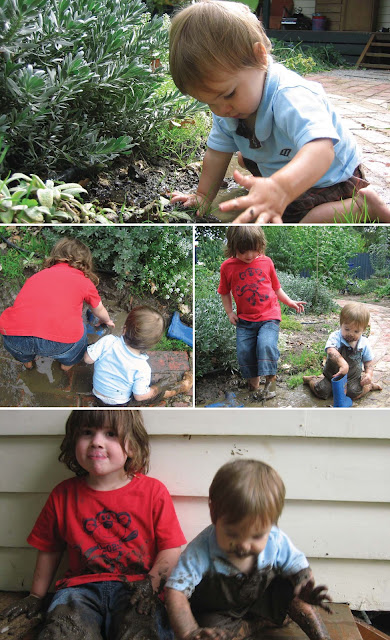 There comes a time in every mother's life where you have to accept certain things.

Like: you're going to work harder and longer than ever before; everything takes longer to do if your kids are 'helping'; you're going need more money all the while earning much less; and having children is the best thing since sliced bread.

I know what you're thinking. No problems.

But this is the one I really have troubles with.

You're going to have to accept that children like to get dirty. Really, really dirty. All the time.

Especially when all you want to do is hang out 7 loads of washing which should take you no longer than 25 minutes. But it takes longer, because you're continually trying to distract your 10 month old from that grey water going into the garden (because you've got the 8th load on).

In the end I let it go. After all, the boys were having such fun. Madison continually saying how 'disgusting' the mud was (all the while stomping in it), while Noah was eating mud pies.

I even let them stay much longer than it took for the washing, just so I could take some pictures.

Happy as pigs in mud. No, make that kids in mud.
Posted by Unknown at 3:33 pm