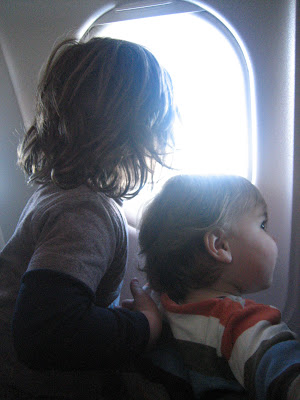 Since both the boys were born, they have flown a lot.

Madison was only 9 weeks before he had his first flight. And it was international.

Although Noah hasn't quite flown from one country to the next, he's clocking up the frequent flyer miles too.

Today the boys went on their umpteenth trip in an airplane. They still get excited, love take off and landing, but with all that flying, they just have certain expectations.

"Mummy, the lady hasn't given us headphones..."

"Mummy, where are the TVs?"

"Mummy, where is my colouring in?"

Now, you know that we are use to flying one particular airline, and today it was not that one.

Poor boys. It was one tough trip.