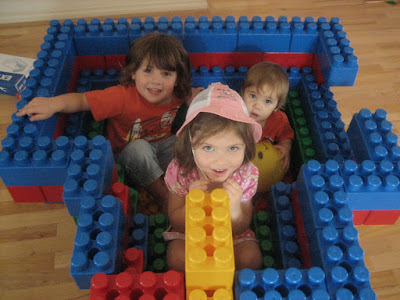 If I could change one thing as an adult, it would be to make friends like little people do.

They don't care if they've just met. Toddlers just start talking, and playing. They even fight like they've known each other forever. But then they make up and move on. They play together despite a possible age gap, difference in skin colour, or being the opposite sex.

Often they don't even notice there's a difference.

Today, we had a playdate with a friend from church and her two little girls. (The oldest one is the same age as Madison while the youngest one has just been born - which is why she's not in the picture.) And although Chiara and Madison only see each other once a week, you'd think they were the best of friends.

As we grow up, we make things so much more complicated.

What do you think?
Posted by Unknown at 8:14 pm