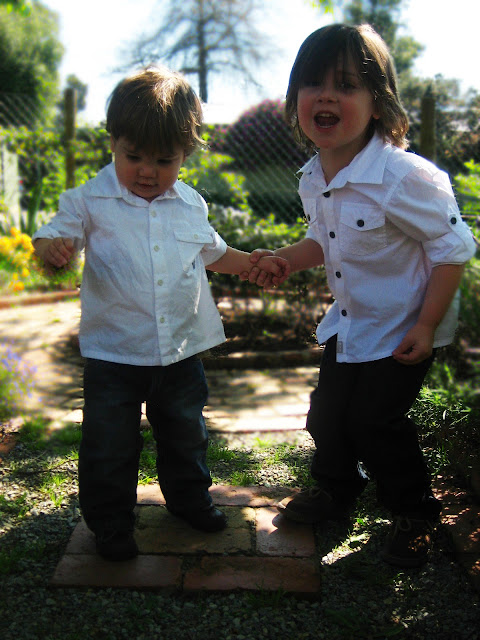 When I was a little girl my mum used to dress my brothers the same. Were they twins? No - they were two years apart. And she didn't really dress them exactly the same. Just different colours of the same outfit. I vividly recall the short sleeved safari suits - Chris's in blue, Stephen's in green. In fact, that's how mum did it. Chris always wore blue (to match his eyes), and Stephen always wore the same as Chris, just in green (and yes, he has green eyes).

As my brothers both live in the United States with their little families, we keep in touch via email (and blogs). Last summer I sent a particular photograph of my boys to my brothers. They were wearing matching orange tshirts and little denim shorts which I thought looked adorable. An email came back promptly from one brother who noted the matching getout and joked, "You know, we're still recovering from that."

Okay, so it's not great for all kids as they may need a little counselling as a result. But at the moment my boys love wearing the same thing. Especially Madison who exclaims excitedly, "Oh Mummy, Noah is wearing the same shirt as me!"

Before I became a parent, I used to think that dressing kids the same was the cheesiest thing ever. I have friends who have identical twins and don't even do it. But since I've succumbed to this appalling behaviour, I'm going to do it for as long as I can get away with it.
Posted by Unknown at 10:10 pm