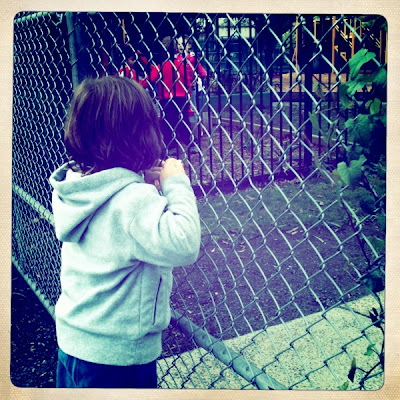 Why is it that choosing schools doesn't seem important until it's your child?

Some time ago I had a reality check. It included my limited patience and the reason why I deferred studying early learning teaching. I decided that my children will not be home schooled.

And since my son's 4th birthday in May, I've been saying to my darling hubby that it's time for us to consider 4 year old kindergarten because our son seemed ready.

My husband poohooed the idea. For quite some time.

To the point where a conversation with a friend this week made me realise that if I don't do something soon, my son will be spending a year being home-schooled.

So, right after my conversation with her I started researching all the schools in the area. The public school grants, the private early learning centres. I stepped out which was the closest, the furthest and which ones would cost the most. I browsed websites which told of essential facilities, printed out questions that I should ask (is three pages too much?), I dug a little deeper with my friends, the mums at the pool, at playgroup, and basically anyone who had an opinion (Facebook is fabulous for that sort of thing).

And after a marathon effort of visiting four schools in a 12-hour period, I'm reconsidering.

Perhaps I've done too much research? Perhaps I've read too much about all the things I should be asking about while missing some of the other features of each kindy? Perhaps I've thought too much about what the 'perfect' school might look like? All those websites with beautiful rooms has certainly raised expectations just a tad.

After some consideration, I wondered if no school was good enough for my child. Despite all the colourful rooms, the government grants and beautiful teachers. I was still unconvinced.

Then I found it.

The perfect kindergarten. Of course it has a waiting list (because I'm not the only one who thinks it's fabulous). But, the list is short, and there's still a chance of a cancellation. And because I suspect the searching doesn't end here, I still have three more interviews this week.

Hopefully time will tell if there's something perfect for my boy, oh, that's also available.

In the meantime, my son will wait patiently to start kinder. Because, he's not as fussy. Because, quite frankly, by the end of the Kinder Hunting Day he had made friends, joined in every activity, and made himself at home at each and every one.

He'd be happy with any of them.
Posted by Unknown at 9:56 pm