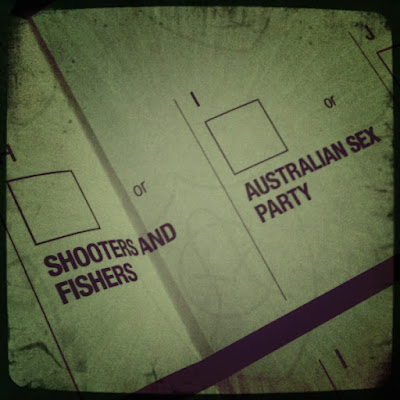 Warning: this post includes discussion about politics, budgie smugglers and the upcoming election.

When I was a child, my father told me that it was inappropriate to talk about the following things:
He also was pretty stringent with etiquette at the dinner table, but that isn't relevant here.

As a child I really didn't understand why these were taboo topics. But as an adult I understand completely. Never is a conversation going to get more firey, more passionate, or more divided when these topics are raised.

For example, a few weeks back a friend was telling me about her salary. She felt she should be earning more. She's a private school teacher who has joined a Union and went on strike. Now, I'm not going to say that I don't agree. But why should she earn more than another teacher working for the public system in the same state? Really, what is fair?

Belief systems are self explanatory. After all, the debate on what you believe is well, your belief. It's hard to argue a matter so close to your heart, your culture and sub-culture (although it seems that many still persist on trying).

And voting? It's sort of like your beliefs, and then you align them with the party that works most closely. So, it's a bit passionate too. That being said, it's a subject I don't mind discussing with a few of my closest friends.

Come this election, this is how I'd like to vote if I could.

Climage change as a main instead of an entree. Double servings of quality health care and education with paid parental leave on the side. I know it's dessert, but please can I have a double helping of reduced debt, and less backstabbing? I'm tired of the board specials and wondering what is with the Millenium Development Goals? It seems that noone has that on their menu board anymore. Perhaps that should be dished up for starters...

Unfortunately, I don't believe wholeheartedly in one party. I really like half a dozen of the policies of one party but can't stand six other policies from that very same group.

What has brought all of this to a head, you ask? Well, last night I was called up by the Australian Poll People asking where my vote would be come voting day. My response?

"Well, perhaps you're leaning more one way than the other?"

"Surely, Madam you have a party preference?"

Oh, that poor guy. He couldn't get a preferential vote from me last night. He tried. He really, really tried.

And after a few hours this morning researching all the parties (Shooters & Fishers included) and what they're selling, the fact is, I still don't know who to vote for. Perhaps I'll stick to the two big ones (where pretty much all the little ones end up anyway).
If only it were just about those two things.

On second thoughts, that could be a hard decision too.
Posted by Unknown at 5:09 pm