8th silly thing | we took ourselves far too seriously 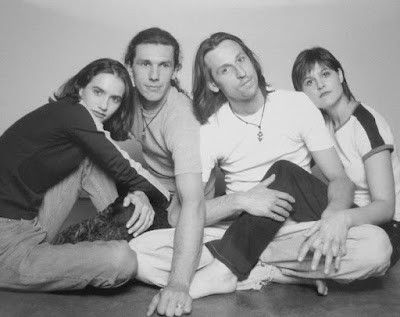 My friend Melody and I have spent the last 24 hours reminiscing.

Playing the music we made, pulling out the old photos (like this one), remembering the live gigs, the recording sessions, the emabarrasing lyrics... all while living 140 kilometres apart. (Yes, Facebook is amazing.)

And mostly, realising how so much has changed. Okay, maybe that was just me thinking about the last part.

Perhaps it's hindsight or romantic reflection. But I don't feel as carefree today as I was while we were posing for this picture. All of us were renting, or living at home. There wasn't a mortgage in sight. We were at the beginning stages of our adult life (some more so than others). We were making steps towards our careers of choice, had dreams and were excited about the future. We weren't married, we didn't have kids, and we really didn't have that many responsibilities.

Of course, I didn't take too seriously wanting to be famous (despite the attitude depicted here). I really enjoyed singing, shaking those percussion eggs for all they were worth and performing whenever we could. I loved hanging out with these guys (still do) and was living for the moment. But I know that was just me.

In fact, while half of us had dreams of fulfilling other passions, the other half had a love for music so strong that one is now living in North Queensland performing and recording for a living (he's also living his dream of being a vegan hippie). The other one, well they'd like to be doing the same (minus the vegan hippie part). And they will, one day, because they are super-duper talented.

Dreams of grandeur. I think they're for the young. Not that I'm not young. But dreams of being famous are for those who haven't had much life before, and have a whole life ahead. For those who think it's years and years of time before they're 30. In fact, in those early years, who's even thinking about tomorrow?

Perhaps our dreams don't die, they just change as we get older. Perhaps they get more realistic. Perhaps we won't be rich and famous touring the world while everyone recognises us by our first name. Maybe the more realistic dream is getting regular work, earning a living, and people who love your style and support you by buying your albums.

While I had a break to pull my thoughts together for this blog entry, I did today's dishes and pondered on my dreams. Of course it hit me that I'm obviously not living anyone's dream of grandeur as I don't even have a dishwasher.

Between the four of us, there's been four weddings (none to each other), six male offspring, two mortgages, sensible jobs (or the thought of sensible jobs), financial struggles and life issues. The guys don't even have long hair anymore (we've left that to our respective children).

And what of our dreams today? Or our altered dreams?

One thing is certain: if we were posing for the above photo today, I, for one, would definitely be taking myself much less seriously.
Posted by Unknown at 9:33 pm