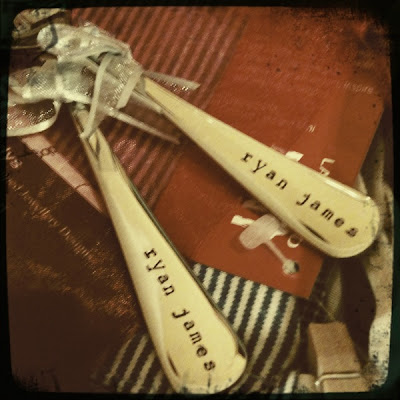 This morning my brother Stephen and his gorgeous wife Lee announced the arrival of their first child - a son. Skype is the best invention ever, since I was able to talk to Lee during the labour (don't worry, she'd just had an epidural and was very relaxed), and also see the end result just a few hours later. What bliss!

Although looking at him was a close second to actually holding him (they live in the US, I live in Australia), but I was still over the moon with excitement.

And so prepared. I've known for a while this baby was coming, that it was a boy, and what his name was. So I was proactive.

It was all package up and ready to go, hoping to arrive not long much after the baby.

There was only one problem. I'd been too efficient. (Actually, my husband tells me this often.)

Lee was overdue. So overdue in fact that the birth of her baby coincided with her father's birthday. So they changed his middle name in honour of the birthday boy.

Ryan Keith is now his name. Not Ryan James as listed on the baby utensils.

And now you can visualise me poking that fork into my forehead and banging the spoon against my temple...
Posted by Unknown at 9:45 pm