15th silly thing | the results of an early night 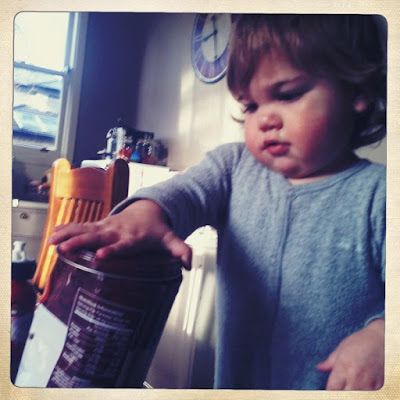 Thursdays are Errand Days. Yesterday was particularly busy. With all the kindergarten research done this week, the last of the kindys were visited, application forms completed, deposits paid, and groceries purchased. The boys both had naps in the car, but probably not the usual length of time as when they're asleep in their own beds.

I noticed that the behaviour steadily declined throughout the day. But that was fair enough, it had been a big one. Madison succumbed to temptation while I was paying for the groceries at Coles. He'd unwrapped a Kinder Surprise chocolate and started eating it. He'd been caught (the silence was deafening) and then an apology and payment for the Kinder Surprise followed. I was upset, but thought this was a great chance for him to learn about stealing (which we have discussed before, but probably not to this extent). I was sorry I had purchase the tin of chocolate wafers as a 'sometimes' treat.

While we headed home, we talked about the one thing we hadn't had time to do: buy Daddy a birthday and Father's Day gift. It's Daddy's birthday on Monday, and we decided that while he was away we'd buy both occasions' gifts so it was all done by the time he got home from his interstate trip.

So, we planned to hurry home and unpack the groceries. The boys would have a bath, we could eat an early dinner, put on our jammies and enjoy a little late night shopping and be home by 8pm - bedtime.

They would crash once we got home.

Plans were short lived when after bath and dinner while I cleaned up, Madison decided to pull the cushions off our lounge and jump on them. He usually does that, so it's not a big deal. But he must have jumped off the couch onto the cushions and banged his mouth on the corner of the office desk nearby. His scream was blood curdling. And after much comfort, bleeding and one big fat lip, the boy finally subsided. He fell asleep. It was 6pm.

By this time, Noah was rubbing his eyes as well - after all, he's used to two sleeps in the day. Well, I thought. They've eaten, they're clean, they both might as well sleep it off. We'll buy gifts tomorrow.

So by the time the boys were asleep, the evening jobs were done, it was 7pm. A miracle.

I changed into my pyjamas and crawled into bed. I finished reading a friend's manuscript (ah, the feeling of finishing a book!) and was ready to sleep by 9:30pm. It's been a while since I was actually asleep that early.

Every work day my alarm is set for 5:30am so I can get my paid work done in the quiet of the house. I was wide awake half an hour before it went off, and decided to make the most of it.

Now, it was probably too expectant of me, but I just thought the boys would get up at normal time - 8am.

But by 6am, there was movement at the station. The boys were up early. I guess it was understandable seeing they'd gone to bed early too. But I had work to do. I told them that they could play quietly in their room until it was time for breakfast.

There was a couple a toilet stops, and requests for drinks which is normal. But I wasn't happy about Madison spitting on the bathroom floor. Apparently he wanted to see what poo tasted like. Well, obviously he didn't like the flavour.

Then quiet. I kept working.

Then there was screaming. I raced into the boys' room to find both of them in Noah's cot. Madison was waving his legs wildly and Noah was scared. With good reason.

And then I saw it.

An empty tin of chocolate wafers on the bedroom floor. The boys had eaten the whole lot.

The stealing, the skydiving, the sampling, sneaking, snacking and swinging. It was all I could do to keep it together. My sense of humour was gone, and I knew it wasn't because I was tired: I haven't rested this well in months.

It's been some time since I've had such interesting marathon of events happen at home, and I confess that I haven't really missed it.

Bring back the good ole days, I say.
Posted by Unknown at 9:04 pm