18th silly thing | toys that have a life of their own 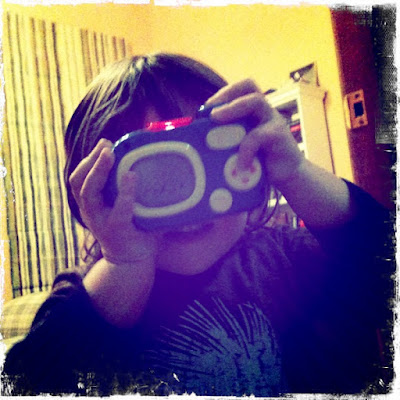 For my one year old's birthday, he received this wonderful toy camera. When you press the buttons it makes the most interesting of noises.

That is until it had a mind of its own. It's started to talk without the assistance of pressing any of the buttons.

Yep. It popped, clicked, puckered, splat and made the most horrid of noises.

While. I. Was. Sleeping.

And by this afternoon I was quite sick of its continual conversation and pulled out the batteries. There! I thought. That'll shut you up.

Later, I heard it again. My son had found the screwdriver and put the batteries back in. He's so helpful. And then while he was outside in the garden with Daddy, I promptly took them out again.

While we were saying grace at dinner tonight, guess what I heard? I couldn't believe it.

My darling hubby had heard the random noises earlier and thought that the batteries must have been going flat. So he put in new batteries.

Just a few minutes ago I observed my husband taking the batteries back out of the toy camera.

Oh, to live in a house of happy helpful men. Thrills my soul.
Posted by Unknown at 11:48 pm

Email ThisBlogThis!Share to TwitterShare to FacebookShare to Pinterest
Labels: my life, silly things, the boys