"I find television to be very educating. Every time somebody turns on the set, I go in the other room and read a book." – Groucho Marx 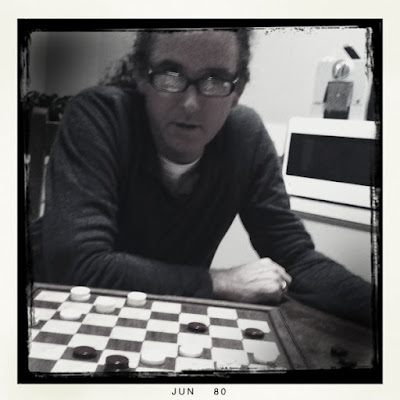 As part of my Photo A Day project, I take a photo on the day that I post to this blog. But the photo I am using today was taken last night. I sure hope you forgive me (and I'm not sure if this officially breaks the rules), but this is the topic I wanted to blog about tonight.

This is a picture of my husband playing checkers.

And this came about because...?

Well, on Saturday night you saw that the People Who Live In My House were playing computer games on their iPhones. And Madison was one of them and he really wanted to learn how to play checkers. So instead of teaching him on the iPhone, we brought out the game board and taught him.

He was a real trooper and stuck at it for about 15 minutes. I'd say that's good for any 4 year old. And my husband said he played really well.

That aside... after their game, I challenged my husband to a game. So once all the jobs were done, we played. And by 10pm we were still going.

It was so much fun.

And that's been how our life has been of late. The television has been turned off in the evenings, my husband has been reading or playing his guitar, while I blog, or mend clothes, or fold washing. It's been nice to sit and chat together in the silence. The children have gone to bed, and we connect. Emotionally.

If I had my way, I would ditch our television as it doesn't really have a place in my life. In my opinion, a whole lot more gets done, and I'd rather live a Real Life than watch a Fake One. Plus it would be one less thing my child would ask for, and if it wasn't there, he wouldn't ask.

Also, television has proved that people will look at anything rather than each other. And it's an invention that permits you to be entertained in your living room by people you wouldn't have in your home.

Today, watching television often means fighting, violence and foul language - and that's just deciding who gets to hold the remote.

Now if only I could convince the rest of my family.
Posted by Unknown at 6:04 pm

Email ThisBlogThis!Share to TwitterShare to FacebookShare to Pinterest
Labels: my life