"To know much sleep less." — Anonymous 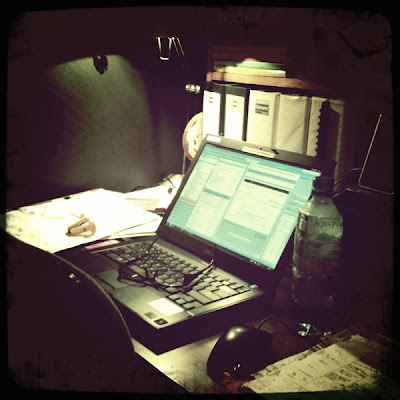 Never has my desk been more organised, my days been more planned or my house been so clean and tidy. There's been time to bake, and I even have lots of time to enjoy, play and learn with my boys.

But I have a confession.

It makes me so tired.

With the boys' changing their afternoon routines, I decided to change mine. Madison and Noah both used to have an afternoon sleep at the same time. But now Noah has merged his two sleeps into one while Madison has suddenly discovered he doesn't needs a sleep after all. Let's just say, Quiet Time isn't as quiet as it was.

So instead of getting frustrated every afternoon expecting both of them to go down to sleep, I just now get up earlier and work quietly in my office.

It had been working like a dream. Before the household rises at around 7am, I've already worked an hour or two. The house is completely quiet, and there's time to focus on my 'desk' jobs. And then when the afternoon comes, we're free, and I'm not thinking about when I need to get all that work done.

My original theory was to turn my day around so I'm not up late doing things. But that side of the plan hasn't exactly worked. So, instead of going to bed at 10:30pm like I hoped, more jobs have crept in, and I'm still hitting the pillow around midnight, sometimes later.

And even though the boys now sleep through, 4-5 hours of sleep a night for me just isn't working.

Which is a shame, because if I didn't need sleep so much, I'd be getting so much work done.
Posted by Unknown at 11:24 am

Email ThisBlogThis!Share to TwitterShare to FacebookShare to Pinterest
Labels: getting organised