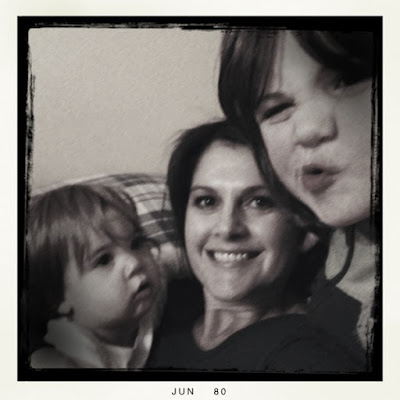 I woke up this morning feeling beaten.

You know, I just wasn't my usual Pollyanna self. I couldn't get out of bed, I was grumpy, and every normal task was done with dread and loathing.

That was because I'd had an awful day on Friday with my four year old. I probably try to do too much as well, but I was dreading what today would bring.

Call me Mummy Naive, but I used to think if you gave your child plenty of positive affirmation and attention, then they would be happy and well-behaved. It used to work so well. But these days, I'm not sure what's gone wrong. I beat myself up that I've not been patient enough, I've not explained things clearly, I haven't been consistent, or that I just haven't done enough with him.

Then I watched my husband roll his eyes many times today and 'crack down' on him too. Then I wonder if we're being too hard on him.

And if I've been a little hard on myself.

It's the first time of transition for Madison. He is now a boy and perhaps we have new expectations. But I think he's challenging the boudaries in a whole new way too. Like on Friday, I don't think he did anything he was asked to do. It came with whingeing, whining, crying and there was plenty of the word, "no". I wanted to pull my hair out.

Now, I've always prided myself on not being the Nagging Fish Wife. But I've been listening to myself lately, and I confess, I don't like the new me.

Talking with an old friend today about my 4 year old was honest and refreshing. She has a five year old boy and she said that she asked herself many times "Who am I?" and "What have I turned into?" Ah, the challenges of motherhood. It's so nice to talk to those who have been there before me, and for me to know that this is normal behaviour. For both my child and I.

When Madison turned two, so many people said to me, "Ah, the terrible two's". I seriously wondered what on earth they were talking about. I mean, we had our moments, but nothing like the challenges we're having now. (Another friend calls them the F@*!en Four's.)

I say, "Cherish the Two's". There's more fun yet to come.